Nick Fahringer, Husaberg rider and Dead Sailor jumper, was our latest victim ‘on the couch’ via skype. We caught up with Fahringer right after Round 7 of the OMA’s in Medora, Indiana. He got a third place; finishing behind Paul Whibley and Russell Bobbitt respectively. For awhile, he was holding Whibley back but a bit of arm pump slowly started holding him back and allowed for mistakes to happen. 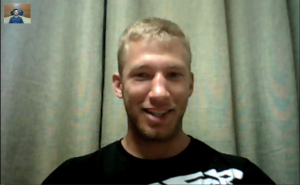 Fahringer has also been contesting the National Enduro Series and doing quite well as of late. He has been on the podium at the last two races, and is starting to pick up momentum toward the end of the season; the same as he did last year. He is hoping for a win though. He knows that the speed is there, he just needs to find it and get the win.

Nick had to have a severe surgery at the end of the National Enduro Series last year, which has taken a toll on his riding this year. After being off the bike, he had to ride and train just to get up to race pace to start off the 2012 year. He has been improving ever since; consistently picking off more and more of the competition.

With three Enduro rounds remaining this year, Fahringer still has time to get a win. At the OMA’s, Fahringer and Bobbitt will have to dethrone Whibley if either of them wants a shot at a win. Nick stated he will compete in the TKO coming up this fall in Tennessee and is looking for any other ‘fun’ events he can find.

We thank Nick for his time and wish him the best of luck. Once he gets his hands on the 2013 Husaberg‘s, he might get an extra spark. Feel free to follow us on Facebook, Twitter and YouTube and remember to always enjoy A Pint Full of Awesome!