In an attempt to recreate the awesome that was the footage from the Red Canyon Enduro, Cole Kirkpatrick wore the Seat Time GoPro for a few tests during the TSCEC Lone Star Two-Day Enduro this past weekend. Strap yourself in, Kirkpatrick tied Ian Blythe the first day and was only 28 seconds behind him the second day, he is moving.

The second test from day two was probably one of the fastest tests from the weekend. It was just under 4 miles long, the fast guys knew it was a quick one and that they needed to keep the speeds high. Kirkpatrick does just that, showing that he needed need a four stroke to go fast in the wide open desert. 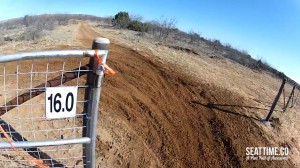