Four-hundred registered participants, over twenty aftermarket vendors plus the associated family members and friends recently ascended the Austrian alp-like terrain of Mount Crested Butte, CO for the 12th Annual KTM Adventure Rider Rally. Aspens or not, orange was the dominant color on the mountain! The planning and execution by KTM’s staff was exceptional. Since the ski season is still 2 months away, the lodging and food service providers really threw out the orange carpet for us (orange napkins, too)!

The trail systems in and around Crested Butte and Taylor Park beckoned for 3 days of “Adventure Bike” riding. The KTM‘s from Mattighofen, Austria should have felt right at home. 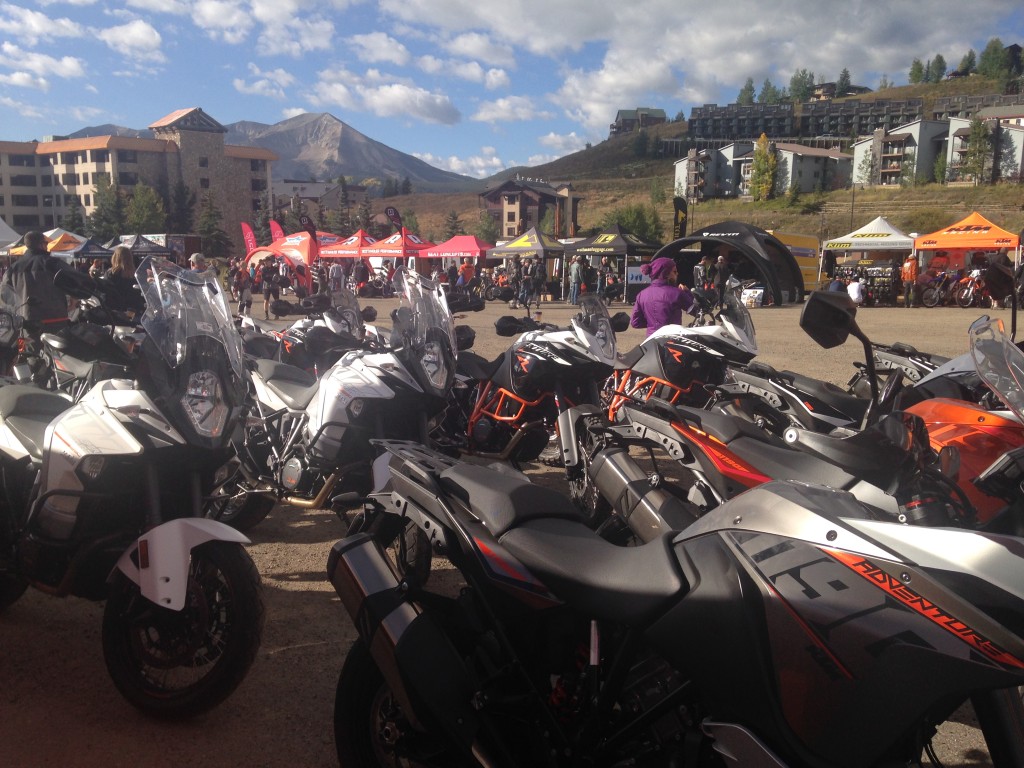 Each rider could pick from any of a dozen pro rider led tours. They ranged in difficulty from easygoing 200+ mile 80% road rides to “Off-Road Expert” 120+ mile iron-man rides over some of the most difficult single and double track trails Taylor Park is famous for. Of course, Andrew Short drew the “Long straw” to lead most of the expert rides. I chose rides somewhere in the middle. My selections were more like 80% trail. On Friday I picked a ride led by Russell Bobbitt and on Saturday I chose one led by Quinn Cody. Some riders familiar with the area planned their own rides based on GPS routes provided by the event and/or their own knowledge of the area.

Don’t think that a 500 pound KTM Adventure bike is a trail slug. In the hands of these KTM pros, mortal riders had to push very hard to just keep their dust in sight! I was riding my 8 day old KTM 690. Due to unfamiliarity with the new bike and VERY rusty riding skills, I was covered in rider’s dust all right, but not from Russell or Quinn. 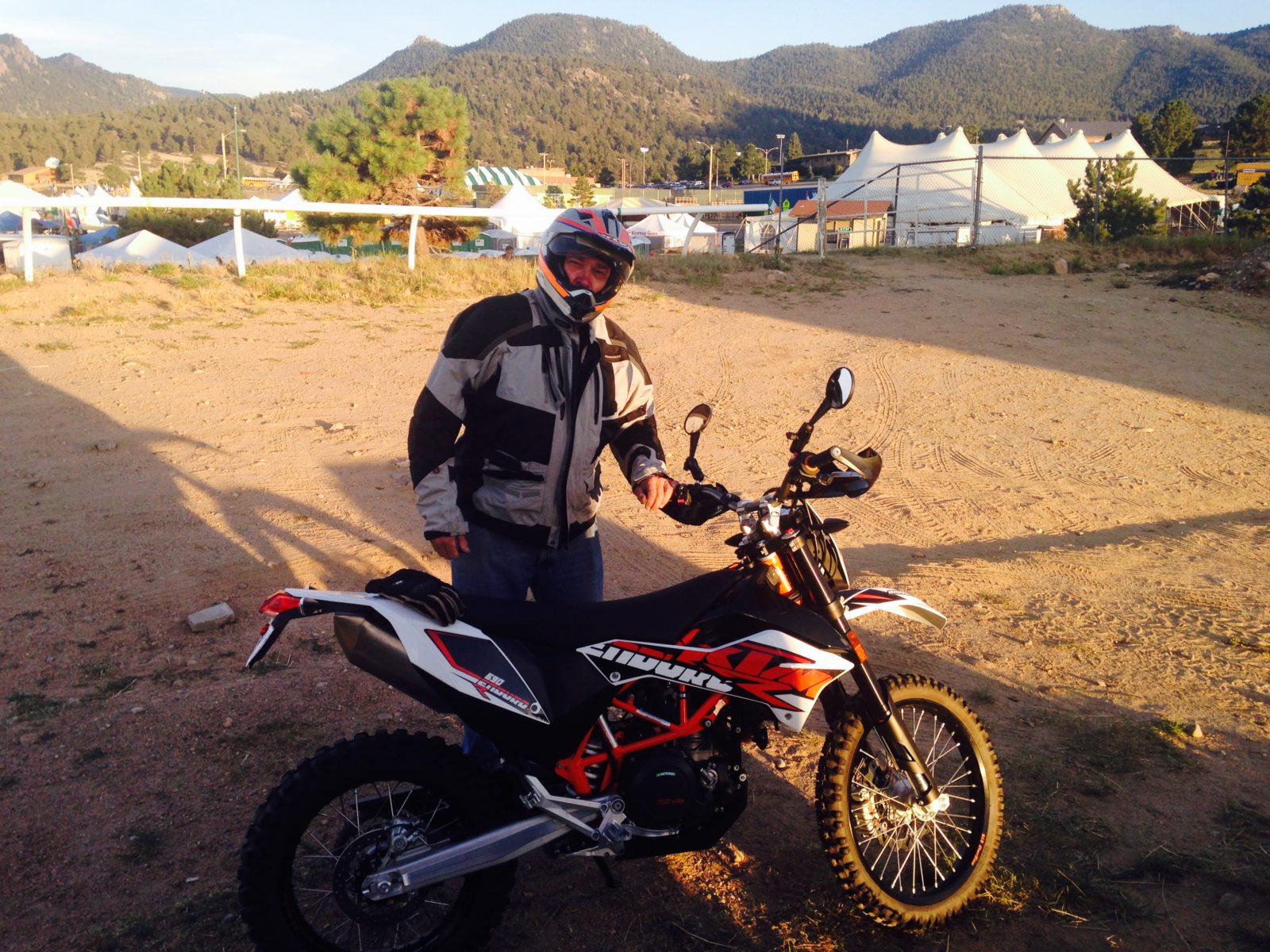 And, powdery dust there was. The area had not seen rain in several weeks. Two months earlier, the Seat Time Adventures ride over many of the same trails was quite muddy. This was not the case by mid-September. I’ve ridden 9 Colorado 500 events through these same areas and don’t remember any years when the trails were quite so dry. On the open slopes, the finely ground quartz and granite powder was very slippery and acted more like graphite than dirt. Ah, but the woods trails and deep valleys retained just enough moisture for great traction.

As an alternative to pounding around in the mountains on a pro led ride, technical riding classes were held near the event HQ by the acclaimed instructor, Jimmy Lewis. He directed 4 well attended sessions over Friday and Saturday. I attended one of his classes at the 10th annual event held at Steamboat Springs in 2013. He offers many tips to fine tune the riding skills of experienced woods riders in dealing with an adventure class bike, having twice the heft and twice the power of most competition enduro bikes. Jimmy also CLOSELY supervises his minions during structured practice sessions. Get it right or he will make you practice it again. He is a true believer in “Perfect practice makes perfect”. It sure helped me deal with the KTM 990 I rode 2 years ago. 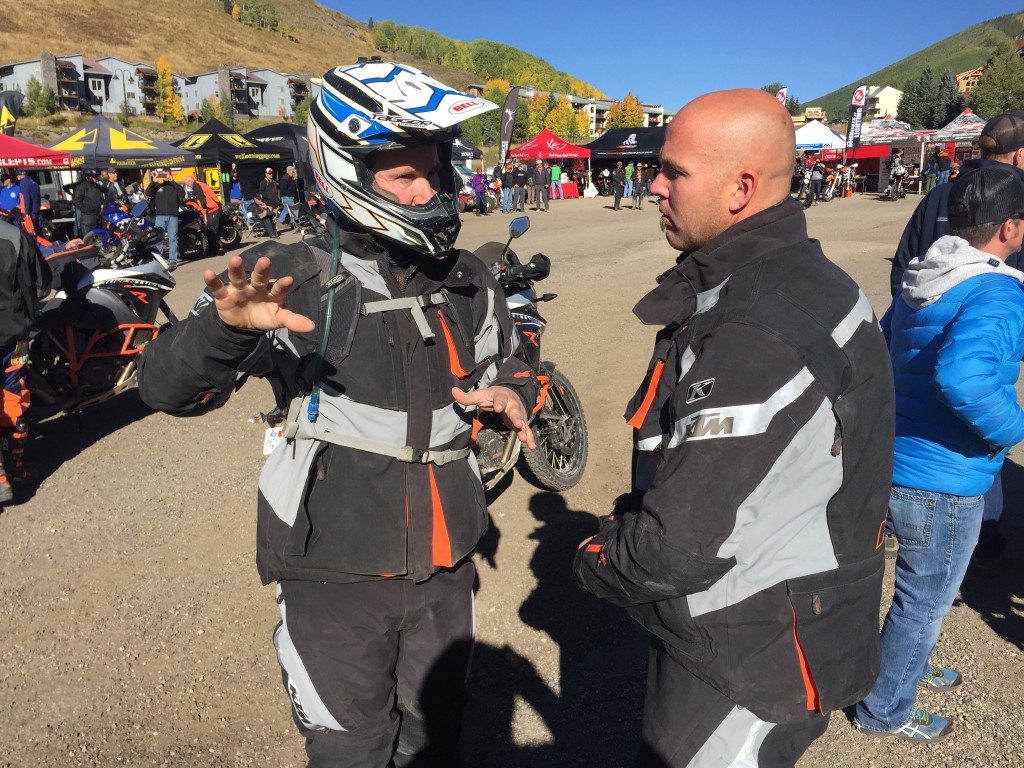 Of course, the KTM sales staff had to get their time in the sun. Each year they bring about 20 shiny new KTM motorcycles for registered participants can test ride. This year they provided demo rides on all models of the 1190 and 1290 platforms as well as the 690 Enduro. The lines to sign-up for the demo rides attested to the marketing wisdom of this activity. I just bought a new 690 and still have my 990. No test rides for me. Show me the dirt!

Aftermarket vendors are one of the highlights of the rally. Talking and problem solving with the folks who actually manufacture the goodies to make the already great bikes a bit better is much better than surfing the internet and hoping you get it right. I was able to buy several needed upgrades to accommodate my 6’5″ height for my new 690, directly from the folks who sell them. And, they also provide free installation at the rally. 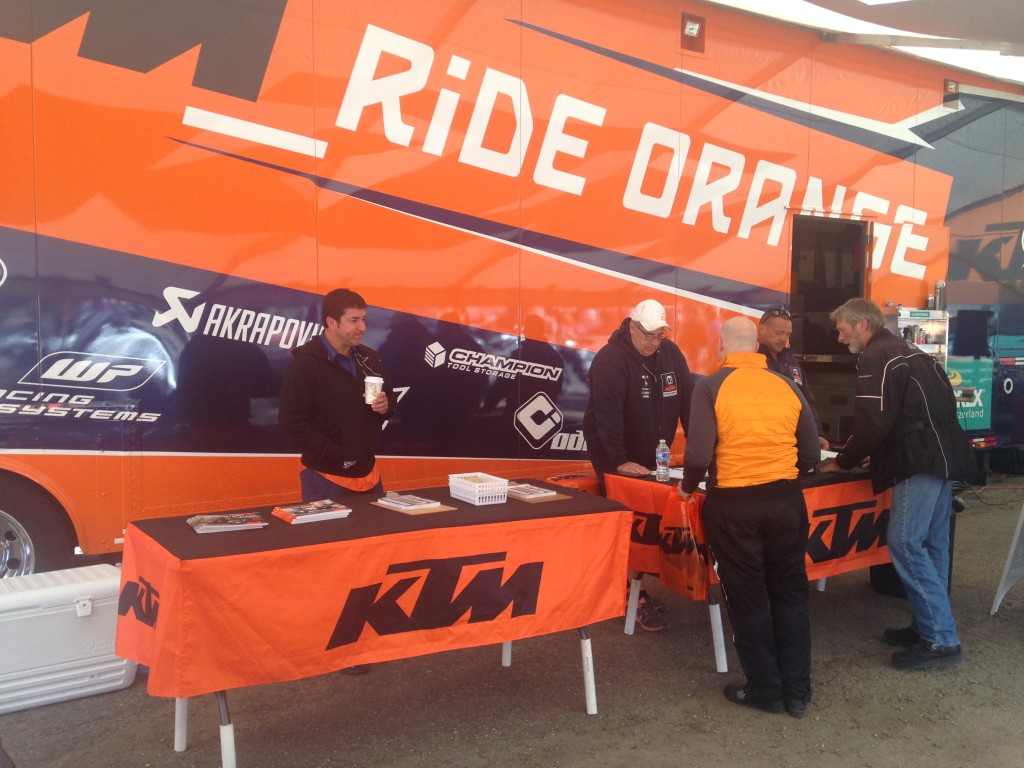 KTM always picks areas that are not only great for riding, but also packed with activities for family members who attend. The 3 prior events were held in very popular locales, Bend, OR, Steamboat Springs, CO and Taos, NM. My wife accompanied me on this year’s event and we both enjoyed the varied activities available. Instead of “me” heading out on a pro led ride on Sunday, “We” mounted up double on the 690 and took a route that she planned. We enjoyed a great lunch, a craft fair and a farmer’s market in the city of Crested Butte. We closed out the day with a 60 mile ride through some of the passes North of the city, taking in the golden aspens.

KTM has not yet announced the exact dates or location for next year’s event. I would give a strong positive recommendation to reserve a weekend in late September. Wherever the location, it will be a winner. Bikes MUST be licensed and street legal. This year’s mix was about 50% Adventure Class bikes, 30% KTM/Husky Enduro (EXC) machines and 15% 690’s. OK, that doesn’t add up to 100%. Riders don’t have to be on a KTM to register and ride. Some riders even brought multiple brand bikes. But, if you don’t show up on a KTM, at least sign-up for a free demo ride. It will be worth it.