The sponsors for this race were Sideline Films, Bayou Fab, Dirtwise, and CNC Motorsports, who donated two sets of tires to the overall senior rider and intermediate class winner. The Race course was great the Altazin’s family and friends worked really hard to try and make the course the best it could be. We couldn’t of asked for better weather conditions overall it was a great weekend of racing. 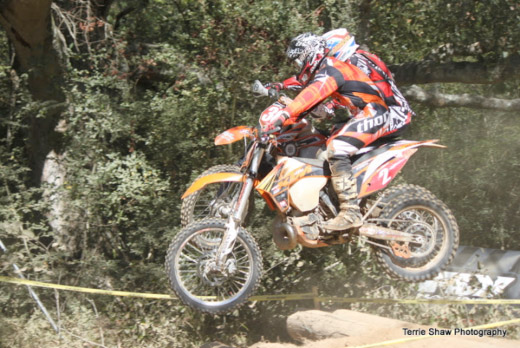 Former owner/founder of LACC, Lucas Comeaux (GAS GAS, Enduro Engineering, EKS Brand/MTA, Sidi), got off to a great start by leading most of the first lap with Bryan Vaughan (KTM, Graham, STR, Shoei, Rekluse, Dunlop, Smith, and Brad Warren) and Jason Harvey (KTM) right on his heels. Vaughan moved into first during the first lap, and pulled a little lead with Harvey getting a little closer every lap. Around the third lap Harvey was all over Vaughan and stayed on his back tire until the last lap. Then Vaughan made a bobble in the creek crossing less than a mile from the end and that’s all it took for Harvey to make the pass. Vaughan was about to make a last ditch effort when he saw Harvey clip some trees and go off the trail, giving him the chance to take back the lead, and take 1st overall to make it two in a row. Jason Harvey put up a great battle for 2nd overall. Wesley Burks (KTM) pushed hard all day working his way up from fifth to third to take his first ever Podium in XC1 class and 3rd overall. Jason Reine (Yamaha) put in a strong ride with fourth overall. Ethan Bryant (HON) road great with his 2nd fifth overall in a row. 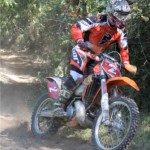 We had some great battles in the XC2 as well. Clint woods (KTM, Woods Tank, Mikes Cycle) worked his way up from a bad start to first. Lance Ford (Yamaha) put pressure on Woods all the way to the last turn, before the scoring tent, taking second. Blake Plonsky (KTM), his first ever race in the XC2 class, started out in the front, but worked his way back to third, with an impressive podium finish. Jeffery Cain, riding a borrowed bike, was running in first for a while, until he feel back to fourth. John Beauchamp (KAW) rounded out the top five in the XC2 with a solid ride.

We had a pit bike race on Saturday afternoon, which turned out great with 10 riders competing. Everyone that raced said it was fun. We had a nice family atmosphere with everyone celebrating Halloween and decorating there campers for the little ones to go trick-or-treating with a hay ride and haunted house. We like to give a special thanks to the Altazins for letting us race on there property. As always check our homepage often for links to photos, videos, and more at acadianaracing.com