The opening ceremony at the ISDE is a lot like what you see on TV for the Olympics, but to a smaller degree. Behind the scenes is chaotic, with team after team being caroled into line to then be presented to a waiting audience of fans. Each country’s team is introduced separately, followed by the Club teams. Team USA had a plethora of club team members and their supporters that walked across the stage. It seemed a bit excessive, but they have worked just as hard as the riders to help prepare them for the event. 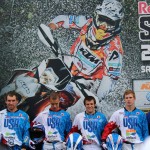 Hoop and I were on hand to capture as much footage as we could. We started the day sleeping in a bit to try and shake some of the remaining jetlag. Once we got back to Sachsenring we were able to watch Team USA take their official ISDE pictures. There was a crazy German photographer placing all the teams in some very interesting poses. It was all in fun, though, and did help lighten the mood from what could have been a very boring obligation.

While waiting for the opening ceremonies I had the opportunity to talk to some of the riders and get a feel for what their thoughts were on the Tests. The French seemed to think the Tests weren’t going to be all that great, due to some of the technical track layouts. The Americans were just the opposite, seeming excited and really looking forward to the Tests. A couple concerns were that the Grass Track, being ridden twice daily, would become very beat up and would change drastically throughout the event. There were also some sections that could become very slick and muddy after riders started to come through. Everyone was excited to be here, however, and looking forward to the challenges ahead. 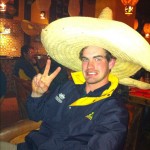 The highlight of my day was getting to go out to dinner with Team Australia. I sat next to Glenn Kearney, conversed with Josh Strang & Toby Price, and met some super fast Aussie racers. These guys are full on all the time and always ready to laugh and mix it up.

Racing starts on Monday, so Sunday will be a scouting day with Hoop to create a plan of attack. We’re ready to go and expecting some great action. Team USA is resting up, walking some last minute tests and ready to go for the W!