Sequatchie, TN (December 10, 2012) – The KENDA Tennessee Knockout, Fueled by Monster Energy has quickly become one of the top off road motorcycle events in the country. The event will be back at the Trials Training Center on August 17-18, 2013.

Tennessee’s Mike Brown has built on his legendary reputation for toughness by winning the first two TKO events. The 2012 win was particularly difficult as rain added to the difficulty and made one waterfall section nearly impossible for even the best riders in the world. “If it gets any tougher than that, then I don’t want to do it again” Brown joked afterwards. You can expect that Brown will indeed be back to go for his third consecutive win and take the biggest chunk of the $10,000 pro purse. 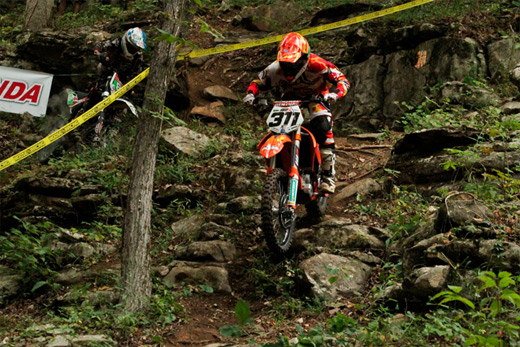 The large purse and challenging conditions has attracted some of the top off road motorcycle racers in the world and you can expect that again in 2013. Cody Webb, the 2012 EnduroCross Championship runner up has finished second the KENDA Tennessee Knockout the last two years as well and wants to win bad. Four time National Enduro Champion, Russell Bobbitt finished third at his first attempt at the TKO in 2012 and likely learned a lot about how to challenge for the win.

Paul Whibley, the 2009 and 2012 GNCC Champion has competed in the TKO the past two seasons as well as Husqvarna’s Kyle Redmond and Colton Haaker. So you can expect these top riders to be among the likely competitors in 2013.

The top off-road racers from around the world will be invited to compete and amateur riders can race on Saturday with the top finishers earning the opportunity to move on to the Sunday Expert Knockout rounds. On Sunday, the riders will compete in a very tough and spectator friendly four round format.