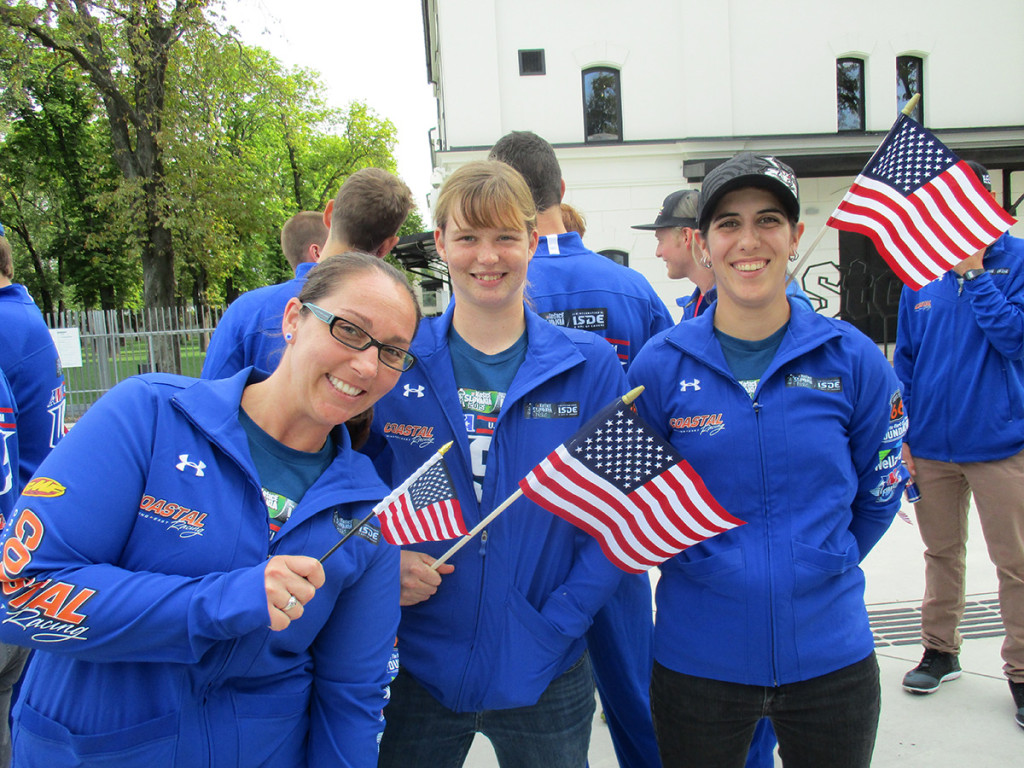 I don’t have much to say about today, other than that I survived and finished. Coming off of this knee injury it’s taking some time to get back acclimated. Because of that it will be harder for me all week, since I haven’t been able to train as hard as I usually do. I was frustrated that on the first lap through I got stuck on the gravel hill, when I really shouldn’t have. I mean, the second time through it was tougher, and quite a few people lost time, but that first time through it wasn’t as bad and I’m disappointed that I gave up those two route points. So yeah, it’s been a bit of a slow start for me, but on the bright side, as the day went on, I started to feel better and better. The last test of the day I was only a couple seconds off Rachel and tied with Jamie, so things are looking up for tomorrow. We’ve still got a long 5 days left, and a lot of things can happen.

Hey, this is actually Rachel. Unfortunately I was unable to get both Jamie and my laptop in one place at the same time, so I don’t have anything directly from her. However, she seemed pretty positive when I talked to her afterward; I think she’s glad to have finished the first day of her first-ever ISDE. Other than a few small mistakes, she put in a solid day, and I for one am impressed with how well she’s done so far. We enjoyed riding the transfer sections with each other, and on the whole, I think she’s happy with how it’s gone so far.

Well, it could have been worse. All three of us are still rolling, which is better than I can say for some of the other Team USA riders (a few of our juniors and some club guys are out with injuries – one timed out due to a bike issue). I rode pretty strong most of the day, and was as high as 5th in the individual standings for awhile.

On our second loop, I made the strategic mistake of waiting to assist Jamie on one of the rougher hills. I had seen two of the Aussies helping each other up, so I thought maybe the two of us had better do the same. Since they count two scores for each team, I figured that I needed to make sure two of us were going strong, even if it meant maybe sacrificing my individual finish in the hopes of making our team do better as a whole. Jamie helped me get my bike up the last part of the hill, then I walked back down to help if needed. I should have left as soon as I saw Mandi (already 3 minutes down at this time) pull up, because the two of them could have just as easily taken care of any problems. Instead of thinking it through strategically, and running back up the hill, getting on the bike, and hauling tail for the checkpoint which is what a rider who has already done this three times should have known to do, I stayed. Instead of getting to the check on time, I dropped 6 route points in addition to Jamie’s 7.

Doing the math, you can see that this cost me a 7th place finish (and only seconds out of 5th), knocked me off of gold medal status (within 10% of the leader’s score), and dropped our team back by at least a position, and maybe two (it’s late and I don’t want to do any more math). So I’m definitely kicking myself over this one. But like Mandi said, it’s a long week, and we may still be able to recover something out of it.

Right now our World Trophy is riding strong and in the lead, followed by Australia, and then France rounding out the podium. I believe Kaliub Russell is leading the world trophy division closely followed by Ryan Sipes.

Junior Trophy team is struggling – Layne Michael has gone out with a broken wrist, and it Stu Baylor crashed late in the day, injuring his shoulder. He finished and impounded, but it is uncertain if he will continue to ride.

Currently our top club team is Gofasters.com, in 8th place. The members are Reid Brown, Nathan Ferderer, and Brian Garrahan