FORT WORTH, Texas (May 22, 2013) – While IZOD IndyCar Series driver James Hinchcliffe continues to grow his fan base with his torrid start to the season, Texas Motor Speedway is providing yet another reason for its fan base to root for the driver of the No. 27 GoDaddy Chevrolet for Andretti Autosport in Sunday’s 97th Indianapolis 500.

Texas Motor Speedway will offer a frontstretch ticket for the Firestone 550 on Saturday, June 8, for a price that directly correlates to Hinchcliffe’s finish in the Indianapolis 500. The tickets could be as low as $1 should he emerge victorious and no higher than $33 should he finish last, and either end of the spectrum will offer solid savings on the designated seating sections.

An allotment of 500 tickets will be available to fans for purchase beginning Tuesday at 9 a.m. CT, with a maximum purchase of four tickets per person. The ticket promotion only is available by calling the Texas Motor Speedway ticket office at (817) 215-8500.

Considering Hinchcliffe’s recent success in the Indianapolis 500 and his impressive start to the season, it appears fans could be primed for a steeply reduced ticket price for “America’s Original Nighttime IndyCar Race.”

“It’s been a great start to the season for me and the GoDaddy crew,” Hinchcliffe said. “We’re hoping to continue on with a solid performance at Indianapolis (for Sunday’s Indy 500); we’re pulling out all the stops – no limits. It’s cool to see Texas Motor Speedway getting involved in the buildup to INDYCAR’s return to Fort Worth. I love racing in Texas and can’t wait to come back… and hopefully help 500 fans score some super low ticket prices!”

Hinchcliffe has captured two wins in the season’s first four races, including the series’ most recent event at Sao Paulo, Brazil, and currently is fourth in the IZOD IndyCar Series championship.

Along with his strong start, he looks to ride the momentum of last year’s performance at Indianapolis Motor Speedway. Hinchcliffe started second in the 500-mile race – losing out on the pole to Ryan Briscoe by 0.0023 of a second – and went on to post a sixth-place finish. Hinchcliffe will start on the outside of row three for Sunday’s Indianapolis 500 (ABC-TV, Noon ET/11 a.m. CT) after qualifying ninth with an average four-lap speed of 227.070 miles per hour. The Firestone 550 will be broadcast in primetime live on ABC-TV, beginning at 7:30 p.m. CT. The Firestone 550 is part of a doubleheader weekend that includes the NASCAR Camping World Truck Series WinStar World Casino 400, which will be held the evening of Friday, June 7. Tickets for all race-week events are available by calling (817) 215-8500 or by visiting www.texasmotorspeedway.com. 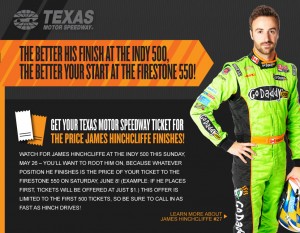 For more information, contact TMS Media Relations at (817) 215-8520 or pr@texasmotorspeedway.com.