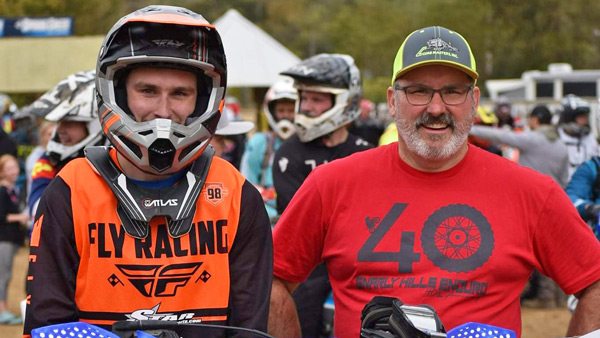 The number one reason I ride is to be connected with so many people across the world in this great community of dirt bike riders and racers. From the camaraderie at the local races to people you’ve never met that are now some of your closest friends through social media, it is so cool to be united by this great sport.

What also motivates me to keep riding is that get to I spend a lot of time with my dad. Long road trips across the country to ride or race, trail riding with him on weekends off, wrenching on bikes together all these years, and so many other memories that have come from being involved in dirt bikes.

I learned to ride from my dad in September of 2005. I was four years old. My brother had just moved up to a KTM Pro JR 50, so the trusty PW became available for me to ride. I learned to ride in the side yard of our two-acre lot. I spent countless hours as a kid making laps upon laps around our house any chance I could. Luckily, we had cool neighbors that didn’t mind the noise.

Although I have recently been getting hooked on mountain biking, my love will always be dirt bikes. I’ve been riding dirt bikes (primarily off-road) for the past 15+ years. I love getting out and riding with a few good buddies, whether on an MX track, singletrack, or just spending hours exploring open space and play riding (probably my favorite thing to do on a dirt bike). Nothing beats the feeling of doing something really cool on a dirt bike (dragging bars in a rut, hopping over a huge log, making it up a nasty hill climb, launching a natural jump), or better yet, watching one of your best buddies do something cool!

My favorite place to ride has to be Theilman, Minnesota. There is a trail ride here twice per year, and it draws upwards of 1,000 people for the weekend. The dirt in the river bottoms sections is unbelievable with a bit of moisture in it. It is incredible the amount of traction you can get: almost enough to drag the handlebar in a flat corner and pull a perfect power wheelie out of every single turn. There is also some epic elevation (for MN) with some technical, rocky climbs and descents, and some of the most fun and flowy, sandy singletrack sections I have ever ridden. As Matt Stavish (a local guy who was factory level national off-road rider in the past) has said, “that’s the best dirt in the world!”

Here’s a story of a ride I will never forget.

It was September 2017, a beautiful fall day. My dad and I were going to meet up with a few buddies to ride some private land with some of the most pristine trails in MN (think perfectly prepped mountain bike trails). One of our very close friends, Mike, had not been able to ride all summer due to a large work project that took him across the country, and this was his second ride of the year. We went out and had a solid ride, putting in some miles. Mike had planned on staying Saturday night to ride Sunday, but he was not feeling up to it due to the longer ride we put in. No one thought anything of it.

Mike had a condition called Atrial Fibrillation, a heart condition that causes your heart to race, even at rest. He had a procedure in winter 2016-17 that decreased his symptoms significantly. The following weekend, Mike went to ride with another group of people (most of whom he had never met before), and instantly befriended everyone (as he did with so many people). In the last 100 feet of trail, just before returning to the parking lot, Mike tragically had a heart attack and passed away on his dirt bike doing what he loved. To this day, I cherish the memories we made that Saturday, and I am grateful for the opportunity to be one of the last people to ride with Mike.