Johnny Girrior is a 16 year old kid from Southwick, MA. When you listen to him talk you think either Jimmy DeCotis (if you are a motocross fan) or Good Will Hunting. There is a certain way that they accent their words that just makes it fun to listen to them talk. But we didn’t interview him because of the way he talks, we interviewed him because of the way he rides. Girrior has been competing in the new J Day Offroad Series and has done surprisingly well considering he hasn’t been racing for a few years. He took some time off of racing when his dad and close friend passed away. After some healing time though, he decided he would like to do some more racing. The J Day Offroad Series gave him a prime opportunity to race, have fun and maybe make some money. 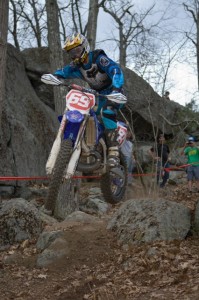 Girrior has won five of the six races so far this year in the Series. A blown bike at the third round cost him six straight overall wins. With nine more races to go in the Series, Girrior has some time to widen his points lead and claim his first AA title.

The future for this 16 year is bright. He has a new YZ 250 two stroke and is having fun while riding his dirt bike. As long as he keeps doing that, he will keep winning, keep getting noticed and keep putting some extra money in his pocket. It was great to talk with him and we wish him the best of luck!