We all know that the future of any sport relies on the youth that are involved. They grow up to become the stars, organizers and lifetime fans of the sport that they love. They should get more recognition for doing what they do at such a young age and that needs to come from media outlets like Seat Time. 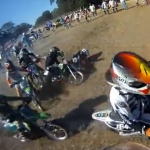 The video above is from Austin Henderson, a local Texas Pro who is recovering from a few surgeries. This has given him some extra time to play around with doing some video work. He makes an effort to film for the Pee Wee riders so that they can see themselves on YouTube and show their friends. It’s pretty simple to keep these guys happy, and Austin is doing a great job in his attempts.