There were a lot of questions going into the season opener of the AMA/Rekluse National Enduro Series this past weekend in Greensboro, GA. Many revolved around whether or not the defending champ, Steward Baylor Jr., would be throwing a leg over his factory KTM to try and salvage some points after 15 weeks off the bike. We now know that Baylor was willing to give racing a try, but a lesson was learned in the young racer and he will be rethinking coming back too soon in the future.

Charlie Mullins switched things up a bit to start his National Enduro racing off by riding a 350XC-W instead of his 450SX-F. Whether switching things up helped or Mullins is just happy to be healthy and racing, he out performed the rest of the field, coming away 39 seconds ahead of second place finisher Nick Fahringer. Russell Bobbitt rounded out the podium, finishing 31 seconds behind Fahringer.

Cody Webb also finished third on a podium this past weekend, but he was fighting a different group of riders to the top of Hell’s Peak at the Hell’s Gate Hard Enduro outside Il Ciocco, Italy. Graham Jarvis and Johnny Walker, respectively, kept Webb from topping another podium in 2013.

We will be joined this Tuesday by Charlie Mullins and Cecil Parker. Parker is a multi-time Seat Time guest, known for his ability to keep viewers on their toes and the red solo cup full! Parker and host, Brian Pierce, will talk with Mullins about his off-season, his Cherokee National Enduro win and all the joys of being a new dad.

Join us live, Tuesday, February 19th, 8pm CST, on seattime.co/live while we talk through some recent off-road news, results ands online shenanigans. We’d love to field your questions you have for us and our guests, so join us in the chat room and prepare for a Pint Full of Awesome! 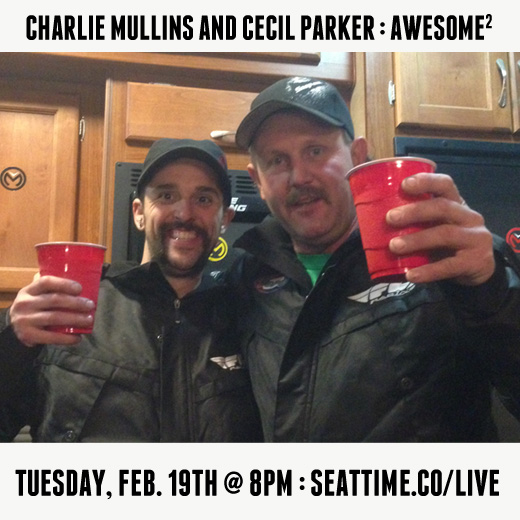