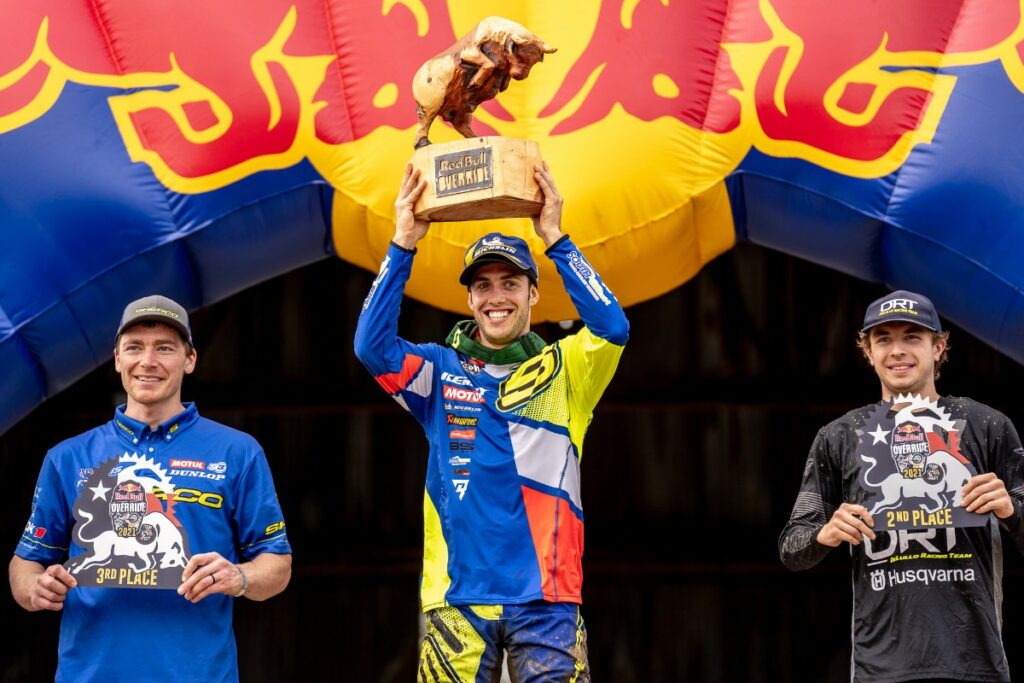 The Red Bull Override is a Hard Enduro event that showcases what Texas has to offer to racers looking for more than a traditional off-road challenge. Though the event is in its third year, racers and spectators were treated to a new venue and format for this year’s three day extravaganza. We also saw what we have always wanted to see when it comes to Hard Enduro support: vendors from outside of the industry.

The Override weekend was partnered up with the Texas 4 Fest to bring spectators, and off-road enthusiasts, to the front door of Jeep and Ram Trucks. Each brand had experiences and ride-alongs that showcased how off-road capable their vehicles are, nudging the more two-wheeled centric crowd to take a second look at how they might fill their garage.

The racing that took place over Saturday and Sunday had the expected level of intensity we would anticipate from the caliber of racers lined up. The format and course were where expectations may not have been met. Hard Enduro racers are continuing to evolve every year, requiring the races and race promoters to evolve with them. They are seeking a type of challenge that isn’t just a “tough enduro“. They want puzzles that they have to piece together as they nimbly crawl their way through sections some would fear walking. The course laid out at the Rally Ready Driving School didn’t fit the needs of the worlds best. I do believe the amateurs had a challenging race course, and the idea of Pro Only Override sections helped negate bottlenecks that plague most Hard Enduro events.

Mario Roman showcased why he is one of the worlds best Hard Enduro racers. During the Saturday two hour qualification race, he bid his time behind Ryder Leblond. Once Lebond made a mistake, Roman took the lead and continued to widen the gap lap after lap.

The impressive moment during the night race was from Ryan Sipes. Sipes went down just after the start in the Endurocross section. By the time he got going, he was in last place. He put his motocross skills to good use in the grass track sections, passing all the way to third place.

The Sunday one hour final saw Mario Roman lead from start to finish on his Factory Sherco 300. The racers were bunched up on the first obstacle, due to Roman blocking the course. Once he got moving, it opened the path for everyone to fall in line. Ryder Leblond held second place the entire hour, putting his DRT Husqvarna 300 second on the podium. Pat Smage stayed upright enough to claim third place on his FactoryONE Sherco 300.

I hope we see the Red Bull Override come back for a fourth year. I personally like the original 6 hour format better, the long time on the bike and riding into the night. It adds another layer, and style, to the different Hard Enduro events taking shape around the world. I’m up in the air about Rally Ready Ranch as the venue. I just don’t think it has the terrain needed to challenge the worlds best Hard Enduro racers, but for the concept of the weekend’s event, its an amazing location.