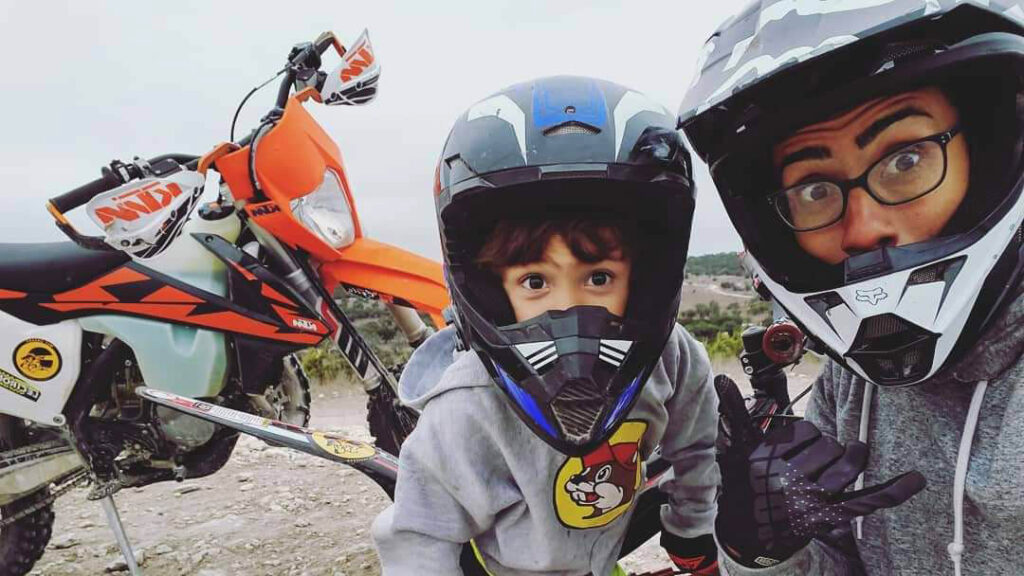 It’s difficult to pinpoint a single reason I ride, but the biggest one is definitely the time I get to spend with my friends and family. We are so lucky to have met some incredible humans over the past six years and have made some equally incredible memories. Most weekends, we get together with our crew to camp and ride. I get to watch my son progress every time we go out, and that is so special! I would say spending time with everyone off the bikes is just as great as riding.

I started entertaining the idea of taking on dirt biking in 2014. I wasn’t fully committed at the time, but I knew it would most likely, one day, consume my life. I learned how to ride on a 1995 KE 100. Probably not the best weapon of choice for the type of riding we were interested in doing, but it was what we could afford at the time, and, frankly, we didn’t have much knowledge on what the perfect bike was. We have learned so much since then.

I have Victor Young to thank for this venture into moto. He was a close friend of my husband’s and was heavy into riding back then. He introduced us to some amazing people in the local scene and some great properties. The first time I ever rode Hidden Falls AP was on that KE, and it sucked! Things have changed as he no longer rides due to health reasons, but I will forever be grateful to him for introducing me to this wonderful world of dirt bikes. I definitely have my husband to thank for making the financial investment in my riding. Without him, there’s little chance I would be riding. He has been so supportive in this journey of mine, and it helps that we get to do it together along with our five-year-old son. We also have two older sons who live in Oregon that ride when they’re visiting. Being able to share this hobby with the whole family is basically a dream come true. It makes it that much more special!

Two wheels are 100% my favorite type of riding. Hard enduro/technical/rocky terrain is my preferred, but lately, I’ve gotten more confident in more fast/flowy trails. I’ve been having so much pushing myself to twist the throttle a little bit more… a little bit. There is just something about tackling a challenging obstacle, though, from picking the right line in a creek full of beautiful boulders, committing to a gnarly hill climb, or trying to avoid going OTB down a sketchy descent into a rocky bed of death.

We recently picked up a couple of mountain bikes, which are just as awesome as dirt bikes. Being in Austin, we are truly blessed with trails everywhere. Being able to just hop on a dirt path and rip around town is so freeing! The skills we acquire from mountain bikes are definitely transferring over to our dirt bikes, which is sick!

For my birthday this year, we decided to go check out a property in Oklahoma called Crossbar Ranch. Someone told us if you love gnar, you’ll love Crossbar, and they weren’t lying. The entire weekend, we were the only people on dirt bikes out there. Everyone else was riding four-wheelers, SXS, or Jeeps. People were shocked to see dirt bikes out there riding the same terrain as they were. It was the first time in a long time, I was almost pushed to tears! In the moment, I hated it, but after surviving some of the insane hill climbs, I was so stoked to have made it out alive and wanted more! I cannot wait to go back and master some of those sections I struggled on.

It’s hard to pick one memory that stands out above the rest, but I would say my favorite memory from a ride would be my kid’s first time learning to ride. He was three years old, and we bought a 1994 JR50 for him. We spent the day at a local property called Spoaks MotoPark, and we brought the bike, not knowing if he would give it a try or not. He was so terrified as he couldn’t reach the ground. It took so much to motivate him to get on and go, but he didn’t want to get off the bike once he did. To stop him, someone had to catch him because he couldn’t put a foot down safely to dismount.

That was nearly three years ago, and he has grown in his love for this sport! He is now on a TTR50 and rips. He has gotten much more confident hitting the trails with us. Being able to chase him on some single track brings me so much joy!

Bekah is also the founder of Fuck Racism.