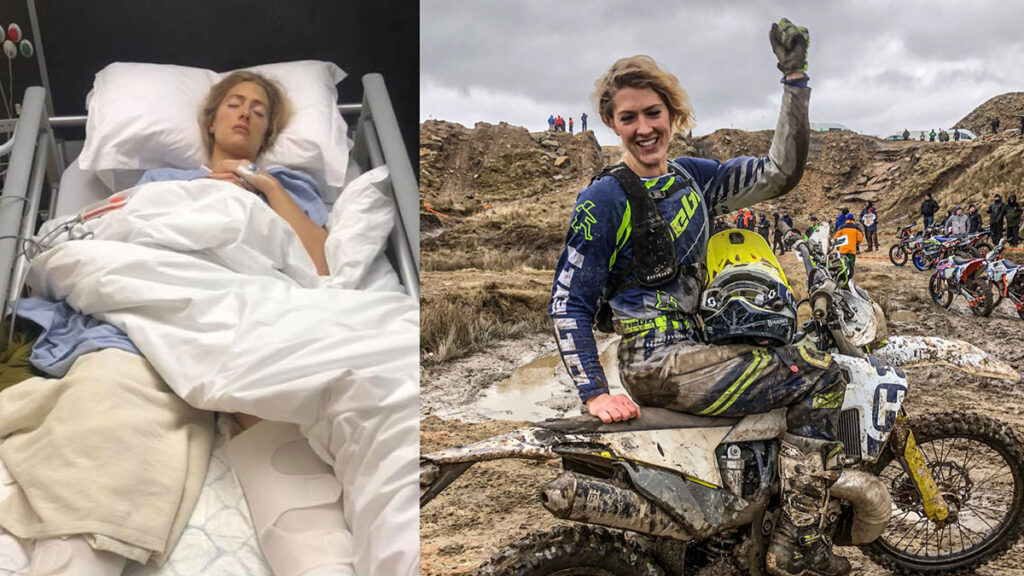 04 MarWhy I Ride Stories: Vanessa Ruck | The Girl on a Bike

Surprisingly to many, I didn’t grow up with motorcycles. I wasn’t a small kid braaping around at an early age. I was into the world of four-legged friends, obsessed with horses. This all changed when I lived in the Bahamas in my early 20s for 1.5 years. Here, on a remote island, transport was difficult. I couldn’t afford a car, so I bought a Chinese Lifan Enduro 250 motorbike and had it shipped in. There wasn’t a single other bike on the island, and I’d never ridden a bike before, but that didn’t faze me. Others can ride bikes; how hard can it be?

I was, however, rather shocked when it arrived part assembled in a box! Yikes. Thankfully a trade for a bottle of rum saw a local bush mechanic put it together, and I was on my way. I never remember ‘learning’ to ride. I just did it as it was the only way I could get around the island. I was very soon found exploring the remote island of Eleuthera, where I lived, with my spear and fins strapped to the side for spearfishing beach adventures.

If I was only allowed one bike, I would pick my hard enduro bike – Husqvarna TE 250i. The adrenaline and mental terrain you can tackle on this bike give me such a buzz. But as a rider, I’m on a mission to ride as many types of bikes on as many different terrains as possible. All the different environments help build my riding skills. So, if it has two wheels and an engine (or an electric motor), I’m in! But if I have to say… I’m definitely a two-stroke girl!

Pre accident life was all extreme sports, kitesurfing being the main one. With my body ‘broken,’ I had to adapt, but I sought more adventure as my recovery continued. Once my body was able, Harleys injected a sense of freedom and adventure without being physically demanding. The wind in the hair and adventure. This was the start of my love for bikes. Road riding on my Harley-Davidson had me loving bikes; however, I wanted more fun and adrenaline-filled. It was this that made me look to adventure riding. I could combine more adrenaline, the physical, and the adventure together. It seemed perfect. I didn’t know in my mind hard enduro was going to be my end goal. Let’s just say it’s escalated! Hard enduro is the ultimate in pushing the bike and body to its limits, but ADV riding gives me culture, scenery, and distance that I’ve just fallen in love with.

One of my favorite memories is the first weekend away on the Harleys. We rode about six miles to a campsite as that was all my body could handle. But I was out of the house, fresh air, and a new scene after so much time in bed recovering. We had a BBQ and bottle of bubbly, and I was out of the house. It was so uplifting for my spirits among so much rehabilitation and pain. Yes, compared to previous pre-accident adventures, it was nothing, but for where I was mentally and physically at that time, it was incredible!

My favorite place on earth to ride

Iceland 100%. That trip was mind-blowing. Over 2.5 million tourists visit Iceland each year to see the big sights. Hot spas, waterfalls, glaciers, geysers, tectonic plates, and lava fields. They pack into coaches or hire cars. But riding here on off-road bikes changes your perspective. We can discover the must-see spots from the less trodden tracks, skipping the crowds, and seeing things most tourists might only glimpse from the plane window. We rode up close to Hekla, slept below the Mýrdalsjökull Glacier, recharged in an abandoned spa, explored huge craters without a soul in sight, picked across lava fields, crossed valley basins and crested mountains, riding volcanic ash berms. It was riding heaven combined with cultural and geological discovery: a trip only motorcycles can make possible.